Bowdens Silver is pleased to report that it has submitted its Submissions Report to the New South Wales Department of Planning, Industry, and Environment (“DPIE”) as part of its application for the development of the Bowdens Silver Project.

This Submissions Report presents comprehensive responses from the Company to the submissions received by DPIE following the public exhibition of the Environmental Impact Statement (“EIS”) for the Project. Submissions were provided by New South Wales Government agencies, organisations and the general public. Overall, the submissions expressed resounding support for the Project with 79% of all organisation and general public submissions in favour of the Project (of a total of 1,909 submissions). Bowdens Silver is not aware of a proposed mining Project in recent times in New South Wales that has received this level of support.

The review of the matters raised in the technical assessment comments provided by New South Wales Government agencies and from organisations and the general public has led to further clarification and refinement of the various assessments for the Project. However, there were no changes to the overall conclusions of the assessments and the Submissions Report serves to provide greater clarity and assessment on certain topics including further positive verification on items including human health, groundwater, surface water and economic outcomes for the Mid-Western Regional LGA and the State.

Key elements of the Project that have been reinforced during this process include:

Along with the Submissions Report, an Amendment Report has also been submitted with the Company proposing to incorporate the proposed re-alignment of the 500kV power transmission line that traverses the Mine Site. Environmental assessment for this amendment was previously undertaken as part of the EIS but was excluded from the application.

The Company would like to recognise the considerable effort by its staff, R.W. Corkery & Co and our team of consultants in delivering the outstanding results in not only the EIS but in the Submissions Report and Amendment Report.

Of particular note, we would also like to thank those in the local communities for their unequivocal support for the Project.

The Submissions Report may be viewed at the DPIE Major Projects website at https://www.planningportal.nsw.gov.au/major-projects/project/9641.

Bowdens Silver will shortly be providing a Community Newsletter incorporating a summary of the key items within the Submissions Report and Amendment Report.

Bowdens Silver recently requested an amendment to the development application to include the realignment of a 500kV transmission line that runs through the proposed mine site. This was based on feedback from TransGrid noting that the realignment would need to be included in the overall application for the Project rather than being assessed under Part 5 of the Environmental Planning and Assessment Act 1979. This realignment was comprehensively assessed within the EIS and included field surveys for biodiversity and Aboriginal and historic heritage. Also, the construction works required for the realignment have been factored into the assessment of the potential noise and air quality impacts of the Project.

A request was made to the NSW Department of Planning, Industry & Environment (DPIE) as delegate of the Independent Planning Commission for the amendment and subsequently accepted. An amendment report will now be prepared and submitted to DPIE.

Further information on the above can be found here.

As most members of the community are aware, in May 2020 Bowdens Silver lodged the Environmental Impact Statement (EIS) and Development Application with the NSW Department of Planning, Industry and Environment for the Bowdens Silver Project. During the public exhibition period, submissions were received from community members, public organisations as well as State and Local Government agencies. The public submission process showed overwhelming public support for the Project with 79% of all submissions in favour of the Project proceeding. Importantly, no Government agencies objected to the Project and only sought clarification on certain points relevant to their role.

Since that time, Bowdens Silver has been preparing the Response to Submissions which is not only a necessary part of the approvals process but importantly responds to all themes raised during the public submission process. Our Response to Submissions Report is currently being finalised and will be released shortly. At that time, further information will be provided to the community outlining the main themes and outcomes of that work.

In March 2021, Bowdens Silver submitted its Mining Lease Application (“MLA 601”) for the development of the Bowdens Silver Project which forms part of the approvals process.

Exploration work also continues to forge ahead and has expanded with four drill rigs now on-site. Drilling will be predominantly targeting mineralisation below the current proposed open cut pit and nearby extensions with mineralisation remaining open at depth. General exploration work is also planned on some surrounding properties and further afield in agreement with landholders. This work is testing our wider geological modelling of the mineral rich systems. All exploration and subsequent rehabilitation will fall in line with NSW Government approvals. Drilling is likely to continue until at least the end of 2021.

As the Bowdens Silver Project progresses through the approvals process, pre-development work will continue to increase focusing on optimisation of the Project as a whole including detailed design work for the mine infrastructure. To accommodate the increased activity our team has also grown with six new staff in our geology, field services, farming and administration teams. Our Community Investment Program continues to operate which provides sponsorships for a range of organisations and events within the local area across our core areas of support including, education, community, sport, safety and arts and culture. As our Project continues to develop, this program will expand.  Input and ideas from community members regarding funding for meaningful community projects are always most welcome.

Bowdens Silver is pleased to advise that it recently submitted its Mining Lease Application for Group 1 minerals silver, zinc and lead with the Department of Regional NSW. Please note that this process is conditional on approval of the Bowdens Silver Project by the relevant authority.

The map below shows the Mining Lease Application boundary. This boundary is an administrative boundary and does not represent the location for mining related infrastructure.

Further information on the overall Bowdens Silver Project can be found in the Environmental Impact Statement summary booklet available on the home page. 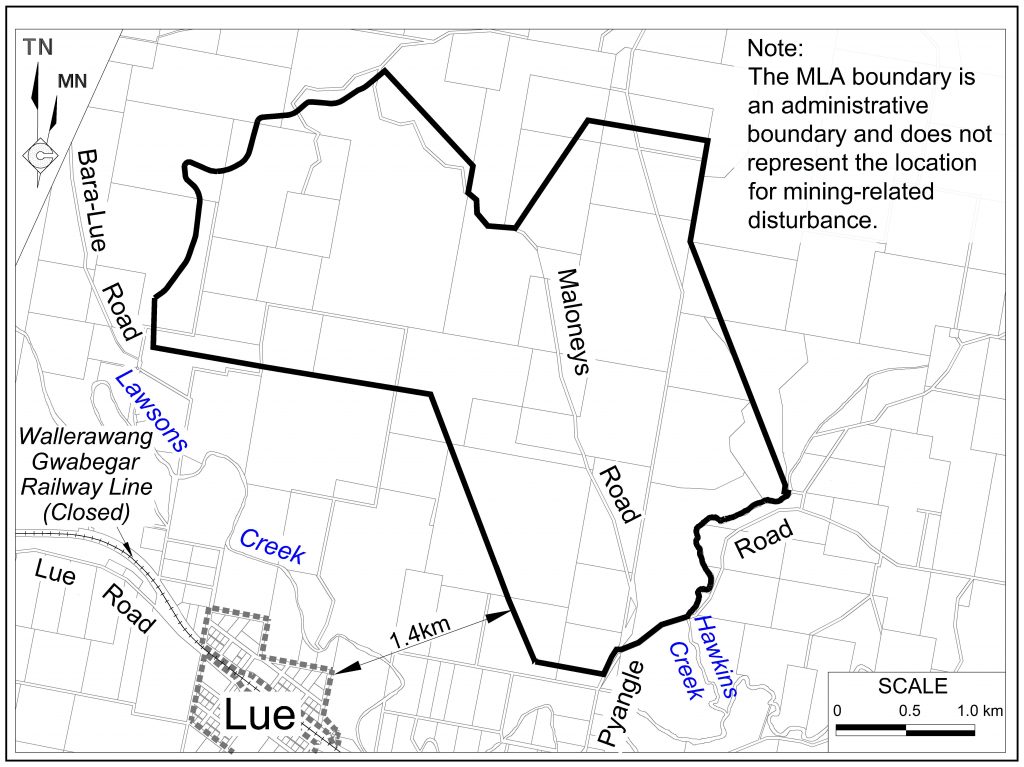 Drilling exploration works are continuing at the Bowdens Silver Project in 2021. Two drill rigs are operating on site with a focus on targeting further high-grade silver zones nearby and below the proposed open cut pit. At present, these activities will continue for the forseeable future in line with current approvals.

Bowdens Silver held two Virtual Open Days on the 2nd and 3rd of July 2020. A range of presentations were delivered and questions answered by representatives from the company, RW Corkery & Co (EIS authors and principal environmental consultant) and other specialist consultants who have contributed to the Environmental Impact Statement.

The current exploration drilling campaign will be extended and is expected to continue to at least the end of 2020. Drilling will focus on targeting high-grade silver below the current proposed pit and also include multiple new targets to extend beyond the current Mineral Resource. Activities will continue to operate based on current days and timeframes.

Planning is also underway to conduct a gravity geophysical survey that will aid in identifying the extent of underground structures and mineralisation. This survey is low impact and once planned is likely to be conducted over 2 weeks.

The Environmental Impact Statement (EIS) for the Bowdens Silver Project has been lodged with the NSW Department of Planning, Industry and Environment (DPIE) and is now on public exhibition until the 27th of July 2020.

You can view the EIS:

Members of the community can have their say about the project by:

Exploration drilling will re-commence at Bowdens Silver during the last week of January 2020. This drilling will be targeting areas that have been highlighted during our recent gravity survey works and are mostly located to the north west of the proposed open pit area and known mineral resource. Drilling will involve diamond drilling with activities planned to occur between the hours of 7am – 6pm, Monday to Friday and run for approximately 4-5 months.

Due to some short-term necessary work, drilling activities will be temporarily operating on three Saturdays from 14/3/20 and ending on 28/3/20.

A comprehensive range of information was presented and displayed at our recent Community Open Day. The links below provide access to all posters that were on display as well as the company presentation that was delivered to attendees on the day.